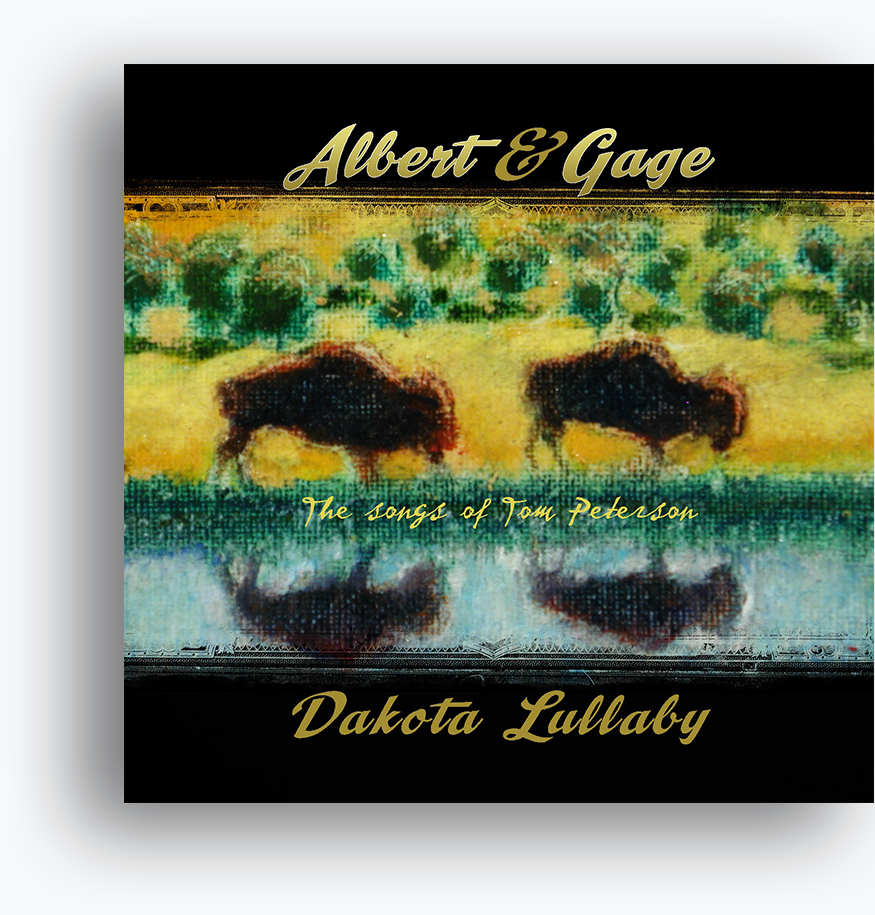 Back to Albert and Gage

The prairie isn’t really endless
Lives neither, just sometimes seems so
(buffaloes know both)
but songs are, TomPete’s go
like prairie seeds and tall grasses does
played over and over and again, different
played blizzardhard, sharptendered sprung,
stormpounded cathowled whole
rejuvenate, recreate, reincarnate,
these songs grow bloomsnblossoms,
‘n lifescents you haven’t met yet,
some bedrock solid,
some heaving stones forced up by heartfrosts
some shrugging shaggy sods off
like your notions you know all about,
songselves their own lifeforms,
some endangered, end-angered, stormed,
soaring feathered, fleet furred,
slithering coiled (is Truth poison?)

A labor of love, that is what this is. Pure, unadulterated labor of love. Prairie and plains might have something to do with the music, but Dakota Lullaby is all about the love: Tom Peterson's love of the Dakotas as well as Christine Albert and Chris Gage's love of song. Remember the phrase "love conquers all?" Well, if it didn't, Dakota Lullaby wouldn't exist. Does the fact that it does give credence to the phrase? For those who would like to think so, here is the story, Cliff's Notes-style.

Thirty years ago, Tom Peterson, denizen of Pierre, South Dakota, wrote songs. Lots of them, in fact. Chris Gage, young and idealistic musician, began incorporating said songs into his act. Fast forward 30 years. (I said it was Cliff's Notes, didn't I?) Gage discovers a Peterson demo tape in his stash and Jack Kreitzer transfers Tom Peterson demos onto a CD, sending it to Albert and Gage. "It didn't take us long to realize that we had an entire album's worth of material that was perfect for Albert and Gage," Albert writes in the liner notes. A project is born.

The joyous side of love and the blue side, the thoughtful side, and the funny one, the crazy bits of friendship and the thought provoking ones, the quiet of a northern prairie night and the voices of those who made history there --- you meet all these ideas in Dakota Lullaby, the latest album from Christine Albert and Chris Gage. There are a dozen songs on the disc, varying in melody from swing to folk to country to blues, in tone from raucous to funny to reflective. Though they are outstanding songwriters themselves, Albert and Gage didn’t write the music on this collection. In fact, the songs were written some thirty years ago.